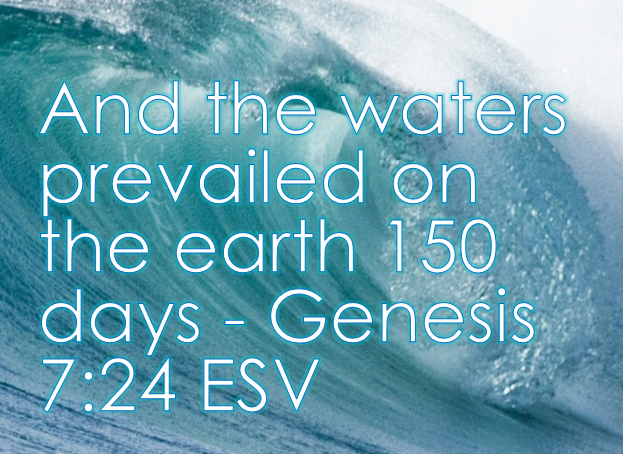 Worldwide flood… Seriously? And this is relevant… How? All humanity and animals destroyed from the face of the planet? Noah’s ark and the ridiculousness of two of every kind on a wooden boat? Really I am having a hard time accepting the crazy you speak of. I know I know. If you really want to get sarcastic look at the cute little children’s stories painted on the walls of Christian nurseries showing the death and destruction of the entire world. It is a sick parent who wants that on the walls in the baby room. Am I right?

The flood event as documented in the Bible is serious destruction at a level that this planet has never seen before. People, Animals, and the face of everything ever built or created by man washed away. The scope and horror of it all is not a cute fairy tale if it really happened. So that is the question did it happen? Is the event credible at all? I want to take a look at a few pieces of evidence that support the possibility that this really happened and it could have happened exactly as recorded.

The first question would be related to the flood event itself. If the world was flooded by water there would be evidence right? There should be a lot of it and there is. The first evidence is cultural and societal. If only a small group or groups of people survived then a catastrophic event of this size should be baked into the myth and background of most every culture all over the world. And that is exactly what is out there. There are hundreds of flood stories in most every culture all over the world. 95% of those myths speak of a global flood and 70% speak of people being saved in a boat. Several African cultures tell stories of God who told two people to get into a ship with seeds and animals. In Norse and Finnish mythology the flood is the blood of a wounded giant or god and I find it fitting to bring some reality to the literal rivers of death that would have been the result of a worldwide catastrophe.

Additionally if there was a worldwide catastrophe then the evidence of its destruction should be available on every continent. While the idea of a global flood is not popular in the contemporary scientific community (As an aside the current scientific community is almost universally wed to the idea of uniformitarian theory that everything we see today is how present day was formed by the slow drip of change excluding almost any possibility of past catastrophes) the fear of catastrophes and the expectation of past catastrophes is not denied by science but when it comes to the idea of a “biblical flood” there is an emotional reaction to run away. We know catastrophes happened and there is a growing anxiety in the general public that one day an asteroid for example could cause a worldwide destruction. Supporting the theory of a flood event is sedimentary rock (meaning water delivered) all over the earth even on the tops of mountains. Even more interesting is the fossil record inside of the sedimentary rock where animals surprised by the sudden event were captured and buried alive by the violence of the water moving mud and sand. The fossilized death of animals and the volume of oil in various forms all over the world buried under layers of sediment scream back as evidence of something horrible in the past history of this planet.

If history indicates that a global flood event is possible then the second half of the question is to look at the “story” of the boat. Is that even feasible? It is hard to imagine the size and scope of what is provided in detail in the Genesis account, but that will soon be resolved. A group in Kentucky is building a full-size replica of the Ark based on the demotions provided in the Bible.

A cubit is around 18 inches long so the conversion rate is a structure that is in the range of 450 feet long, 75 feet wide and 45 feet high.

This video of the building of this ark is interesting and contains a noteworthy quote. When this structure is complete is will be the “Largest timber frame structure in the world.”

The reality of this project demonstrates how absurd the fanciful children’s stories are that depicts a ridiculous caricature of this vessel that Noah was instructed to build. This “boat” is also comparable in size and dimensions of the freight ocean vessels that move all our favorite items from China to the United States over the ocean. For example this large cargo ship is measured at 620 feet long by 100 feet wide. The similarity of Noah’s ship 450 x 75 compared to the dimensions of modern engineering 620 x 100 is astonishing. The size of this ship is amazing.

The final fact I have that supports the reality of God’s judgment on the ancient world is the endorsement of Jesus himself as recorded in the gospels.

The unexpected, violent, quickness, and finality of the flood stands as an example to everyone that Jesus will be returning and all the ambitions and selfishness of this earth will be over. The judgment of the flood is a testimony that God’s grace and mercy are not unlimited. Awake now while we live in this moment of grace and mercy that we would turn to Christ for life and freedom.