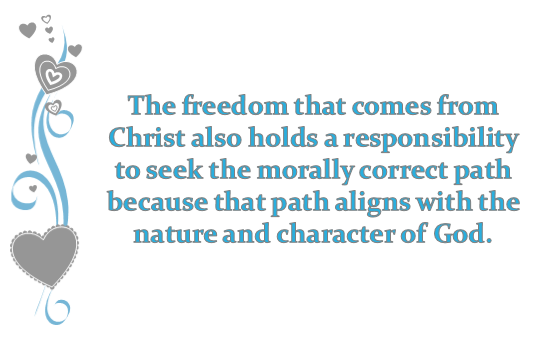 The Bible has some very clear definitions of right and wrong and sets standards for morality. Increasingly those standards and morality are not in alignment with western culture. For example sex and intimate relationships outside of marriage or before marriage should not be acceptable to a Christian that wants to be in right standing with God and the Church. Alignment with the Biblical text will place one outside the popular culture anything goes sexual worldview. Christians are attacked as hypocritical for wanting to maintain a moral standard when it comes to sex because they ignore other rules from the Old Testament like mixing fabric or eating shrimp. Here are a few quotes that I have seen attacking Christianity along these lines…

Why do Christians wear clothing of mixed fabrics when the Bible said not to? (Deuteronomy 22:11)

Why do Christians eat shrimp when it’s an abomination, according to Leviticus 11:9-12 and Deuteronomy 14:9-10

Any time spent on twitter or in the comments section of publications will turn up these arguments and others like them as a way to discredit the Christian worldview. For those that like to use this line of attack please take a few moments to see this response. For the Christian that does not know how to respond please dig in, ask questions, and be prepared to provide reasoned answers to the problems and challenges of the day.

When looking at the laws and rules of the Biblical literature there are some ordinances and laws in the Old Testament that do not apply to Christians living in the western world. These scriptures are not mistakes or part of selective adherence by the contemporary believer. These rules within context are not applicable and it becomes obvious when one reads and understands the context. Essentially there are three different types of laws, rules, or expectations communicated by God in the Old Testament and only one of these three still apply to the contemporary Christian.
1. Laws of the Nation State of Israel in antiquity. For example Leviticus 20:10 NIV states “If a man commits adultery with another man’s wife–with the wife of his neighbor–both the adulterer and the adulteress are to be put to death.” So why do I not demand the local police arrest my neighbor if he or she commits adultery? In America adultery in not illegal let alone qualified for a death penalty. In America capital punishment is carried out in some states and only within a very specific set of procedures for certain crimes. This verse in Leviticus does not apply to the contemporary American because the contemporary person does not live in the nation of Israel as organized at that time. Taken in context this verse is part of civil law and part of the function of organized governance that has no authority over the modern reader.
2. Ceremonial laws that governed how the worshipers of Jehovah were to live before their God. I love the Jewish people, but I am not Jewish, and I do not practice Judaism. Christ when He died on the Cross as the perfect lamb sacrifice ended the ceremonial rules needed to approach God. Christians do not need to sacrifice animals in Jerusalem and they do not need to keep the ceremonial laws intended to make Hebrews holy and presentable to God. Jesus fulfilled all those rules on the behalf of His followers as the perfect and final sacrifice. The ordinances that were put in place to separate and distinguish God’s people are not applicable to the contemporary Christian. What kind of food one eats, how one cuts their hair, or what clothes they wear are part of that ceremonial law and do not apply today.

For by one sacrifice he has made perfect forever those who are being made holy. Hebrews 10:14 NIV

3. Moral laws that are true for all people, in all places, at all times. Finally the question everyone wants to know… why then do we need or follow anything written in the Old Testament and the answer is the moral character of God is revealed there and that character applies to all people who are created in God’s image (every person regardless of color, gender, or culture is created in God’s image). That moral law as seen in the Ten Commandments like do not murder and do not lie are behaviors that are wrong in all places, at all times, and are true for all people.

While adultery may not be against the law or a capital offence in America that does not mean that adultery is acceptable to God. Jesus demonstrated this truth when challenged to pronounce a death sentence over an actual adulterous woman. “Then neither do I condemn you,” Jesus declared. “Go now and leave your life of sin.” John 8:11 NIV. Jesus did not uphold the defunct Jewish Civil law as the Pharisees wanted (if he had he would have violated Roman law the true government authority at that time) but he did uphold the moral law by asking her to stop the life of adultery. While there may be no dress code in western culture that does not mean that people should abandon modesty in public. While one could be a less than truthful salesman and stay within the bounds of the law there is still a moral law about honesty that applies to interactions with other people. The freedom that comes from Christ also holds a responsibility to seek the morally correct path because that path aligns with the nature and character of God. Here is Paul’s warning on this newfound freedom for followers of Christ…

The Christian can be free to eat meat or be vegetarian and still be in right standing before God. The Christian however can be in broken fellowship with God for continually overeating. The same approach applies to sexual relationships. God has a defined standard for sex and living a life outside of that moral standard is living outside of God’s moral character as confirmed even in the New Testament scriptures. Sex is a moral issue between God, the Church, and the follower of Christ. And that is why many lifestyles promoted by society at large may not be honored by God who has set the standards of right and wrong.